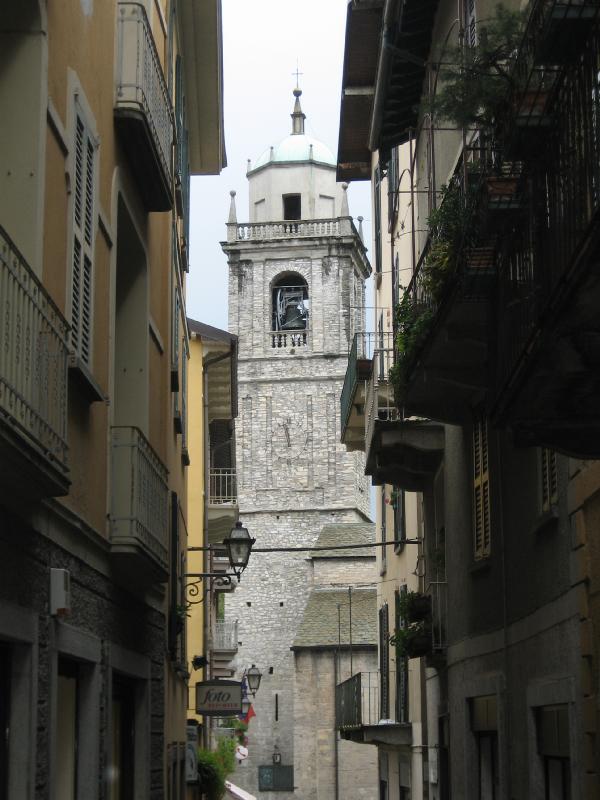 From the chronicles we know that the town of Bellagio, from most ancient times, was surrounded by walls and protected by the castle above it.

From as early as the twelfth century, the borgo (the centerpice ) of Bellagio comprised an area approximately two hundred meters along the shore and a hundred and fifty meters uo the promontory, with walls on the south and north. The southern wall had a gate, today the entry at the Hotel Genazzini Metropole, which admitted traavellers from a road along the shore frommSan Giovanni and Loppia. From this point ascends the Salita Serbelloni where innolden times was a defense ditch ouside the wall.

On the left, about half way up, stonework remains which may well have been the wall itself.

On the right, in mediaeval times, would have been open country with the gardens and buidings of the monastery adjacent to the survivving Romanesque church of San Giacomo.

At the top of the Salita, the modern railing along the Via Garibaldi marks the site of an ancient draw-bridge;

Tourning left on the Via Garibaldi at his point you are at the site of the upper southern gate, which admitted travellers from Lecco and Asso roads.

Frescoes of sacred scenes were usually placed at such town gates; you will see one here on the house at the right.

Proceeding on the Via Garibaldi, you are in a section that enables you to recapture some of the feeling of the borgo in earlier times.

Indeed, it is probable that wall ines have not altered here for many centuries.

To the left you pass the Via della Musica in which two fine stone doorways mark the building that was the feudal prefecture of Bellagio before fiefs wew abolished in Napoleonic times.

To the right , narrow lanes run up to the precipitous abutments of the Castello.

On lane to the right, the Via Stanga, named for Marchesino Stanga , the owner of the Castello in the late fifteenth century, may have been a means of access to it.

Continuing north, you aome to the Piazza San Giacomo and the imposing Romanesque church of that name. As you enter the square , you see at the right a mediaeval towe which was undoubtedly a fortified entrance to the castle area.

Before the construction of the church of San Giacomo, which is dated between 1125 and 1150, the towe that later bacame its campanile was a defense towe of the town wall at its northern extremity.

The church seems to have retained its original dorm until the end of the sixteenth century, when Bishop Feliciano Ninguarda of Como visited and described it.

At that time it was directly dependent on the Arch-presbyterate of San Giovanni, but 1657 it became an independent prevostura, and at about the same time it was subjected to alterations in Baroque style until, in 1902, as a result of the enlightened efforts of Carlo Grandi, Prevosto of Sant’Agata in Como, a native of Bellagio, a campain to restore in the church to its pristine state was successfully carried out.

If you wish to learn more about the San Giacomo church keep reading the articles about it.

It has a central nave and two side aisles ending in three half-dome apses. Each of which is immediately preceded by a groin-vaulted bay.

The masonry coumns that support the aeches dividing the aisles from the nave are constructed of black marble from Varenna on the lake’s eastern shore.

The main body of the church is built of the fine stone from Moltrasio on the western shore that is used in many of the Romanesque churches built around the lake between 1000 and 1200.

On the left, just within the western entrance, is a modern baptismal font. Further on in the left aisle is a fine painting attribuited to Perugino: “The Deposition”