The 23 suburbs scattered over the vast area of land streching from the lakeside – situated 229m above sea leve – to the top of Monte S.Primo – 1.686m above sea level- are all part of Bellagio. The “Borgo” is the town historic centre and was one of the first area in Bellagio to be inhabited. This itinerary will help the visitor to find out more about this main part of town.

You can start yourtour From Bellagio Piazza Mazzini , in  front of the boat station. This is not an ordinary plaza shaped but has got characteristic arcades that underwent radical changes during the 18th century following the extension of the  area on the lakeside where the market was hel.

Opposite the bost station landing stage n1 , under the lake’s waters in 1829 and below this, another date 1868.

Particularly abundant rainfalls caused the lake to flood in both years. Sadly , there have been other cases of flooding- they are not recorded on this column however.From here,you can start your tour by walking along the road pausing far a few minutes to admire the entrance to the Grand Hotel Villa Serbelloni on the left, just after the first bend. It was originally built as a private villa in 1852 and was changed to its present-day one at the beginning of the 20th century when the Villa Serbelloni (nowdays property of the Rockefeller Foundation of New York) became part of the hotel property.

As you go uphill, instead of going straight up to the church square, we recommend taking a walk along the road to the left which leads us to the trip of the promontory called the “Punta Spartivento” which, literally translated, means the point where the wind divides.

The view from here are exceptional and undoubtedly amongst the best on the Lake Como. This is the point where the lake splits itself intoo three branches: to the right, the Lecco branch (south-eastern branch); to the left, the Como branch (south-western branch); and straight ahead of us, to the north, the Colico branch. A perfect backdrop is provided by the serene and majestic mountains so beautifully described by Alessandro Manzoni in his masterpiece, the “Promessi Sposi” – “The Betrothed”.

Returning along the same road, we now head for the church square (piazza San Giacomo) in the upper part of town. Here the most important feature is, of course, “St. James” Basilica, one of the best examples of the Lombard-Romanesque style architecture in this whole region. It was built from the end of the 11th century to the beginning of the 12th century and was decreed a National Monument in 1904 . 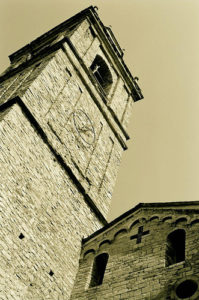 On the lower part of the bell tower is a Memmorial plaque to those who died during World War One . It is thought that the lower part of the bell tower already existed as part of Borgo’s medieval defence system long before the church was ever built. The church was built incorporating this tower which was more or less the same height as the roof. The tower was later trasformed into a bell towe. The actual bell towe as you see it today dates back to the 18th century and was restored in 1990.

If you’re interested in visiting the church interiors (well worth a visit), we advise you to go in throught the  main entrance and pick up the detailed information leaflet from the small table on the right.

After visiting the church , if you step far a few minutes,you’ll see the Bar Sport-in bygone time of a monastery. On the right hand corner of this building there is another Memorial plaque on the wall which commemorates Teresio Olivelli who was born here. He was a braave officer of the Alpini regiment and founder of the clandestine paper “The Rebel”. He was bestowed with a gold medal far his bravery and was deported to the Nazi execution camp in Hers Bruck where he gave his companions moral support and assistance right up to his death.

If  now  you turn your  back to the bar and look across the square and upwards, you get a glimpse of the Villa Serbelloni   , an important conference and study centre which has been owned by the Rockefeller Foundation of New York since 1959. The grounds surrounding the villa cover a large portion of the promontory and can be visited from April to the end of October, only on guided tours which take place everyday except Mondays. Departure is from the gates behind the basilica’s beautiful apse. Tours are cancelled in the event of bad weather . Down to the right you can see a tower which is all that remains of Bellagio’s medieval defence system.  Right in the centre of the square is a beautiful granite fountain which was made in 1897 by Mr.  Pical, an English man, owner of the Villa Bornè. The fountain was originally in the garden by the Villa Gotica and was created to celebrate the 60th anniversary of Queen Victoria’s regin. The fountain top’s original decoration was a star. Between 1908 and 1910 the fountain was moved from the Villa Gotica to the cobble square. In September 1947, a statue off the Madonna Pellegrino (the Pilgrim Madonna) was carried in procession through the streets of Bellagio and to celebrate this special event, the fountain was embellished – the star was removed from the top of the fountain and was replaced with the statue of the Madonna as we see it today. 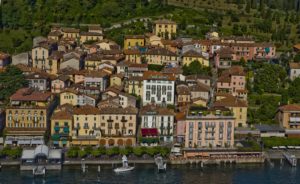